The China-based start-up ByteDance became the first to crack the US market with its video production app call TikTok. Though TikTok being the most downloaded mobile application for the year 2018, it is most likely that you along with the majority of the population is still not aware of the existence of the app.

But other digital giants are racking their brains how TikTok has done it? How the video making and sharing app is growing into a social network? All is just a beginner’s luck or did they have a secret formula for their breakthrough that other marketers should learn? What strategy did they use to transform themselves into the World’s most valuable start-up, overshadowing Uber?

Let’s Dig deep to find out where it all started.

What is TikTok and Who it is for?

Despite the major expectations for the tech giants like Alibaba, Baidu and more, ByteDance literally danced its way into the western culture.

TikTok is the latest social networking app where Gen Z thrive to showcase their talent in just 15 seconds. A video production app like this claiming to be a social networking platform of self-produced videos and music may not sound appealing to other generations but 4 million downloads in the October 2018 says otherwise. 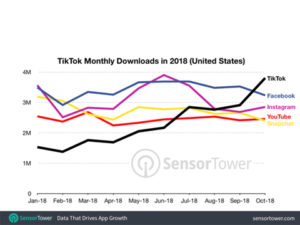 The original TikTok, known as Doujin in China, with its 500 million monthly users just in Asia became the most downloaded iOS application at the beginning of 2018. Later in that year, TikTok absorbed the similar app called Musical.ly which had over 100m active users in Western and European countries. The powerful combination helped ByteDance break the record the same year for a most downloaded app for the Android and iOS and be on the top 40 since July 2015.

In addition to music, comedy and dance clips, there are so much more in the TikTok app as it has a piece of everything we have seen before. Some amateur videos are typically funny while exceptional ones are getting millions of likes and shares.

Zhu with his partner Louis Yang, the genius behind the all-famous Musical.ly app had a major failure even before the launch. The real idea behind the application was short-form educational video courses. But the team realized that it took hours to in curating and recording the short-scripted videos.

With just little hope that’s left, Zhu turned the idea around targeting the young demographics by combining music, video and social networking all in one place, through musical.ly. 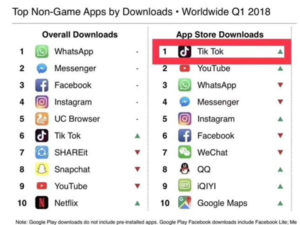 After 10 months, the team worked on major design changes that pushed the app to #1 position in the iOS store on July 6th and Musical.ly app has been on the top ever since.As of today, over 10m users are regularly using the app and the same number of new videos daily are being added daily.

What plans did they get for the future of Social Networking?

Recently, Facebook made its debut with Lasso app, another one in the short-form videos category. Since the app is in its initial phases, the Facebook has to put in so much effort in order to fight for No. 1 position with Tiktok. If Facebook making an attempt to take it down, then it is high time for a marketer to explore the possibilities of the emerging platform as TikTok for brands to easily grow their brand awareness exponentially.

Like most of the other social networking apps, Females, 13-24 have highly populated the app with their lip-syncs and comedy clips while there are some who are truly talented enough to get recognized by the Billboard. Yes, teens are really generating numbers in millions and establishing their own brands through 15-second clips. If you have your target audience as female teenagers, then you must start promoting your brand in the newest form of social network, TikTok.

“I think we have these scary moments all the time because you’re never safe. Even if you have tens of millions of users, you have to keep them always engaged…I think it’s better for us to be scared all the time rather than feel content that we built a successful product and now we can lay back.” –  Zhu

The future of the TikTok looks promising as Zhu is planning to stay and change the dynamics of social networking in the smartphone age. With Facebook, Instagram and Snapchat running the show, the app is looking for stability even with millions of daily users.

“You can buy the users, but you can’t by the user retention” Zhu said.

Wise words from Zhu had the Tech giants looking further into the into then Musical.ly and now TikTok mobile app.

And here is where they have done the right things that have acquired them the all the youngster along with celebrities taking on the platform to promote their new releases.

Let’s discuss some of the key marketing strategies which made TikTok app really tick,

The Major design change is the placement of the Musical.ly logo.  Initially, the logo got cropped out when the “Musers” are sharing their videos in other social platforms. This crucial change grew their brand awareness through social sharing and helped them get recognized easily.

It should be noted that the application is only available for the mobile devices which made itself open to mass demographics. Also, the interface is simple and one can easily access all the major elements right from their home screen. In addition to producing a perfect 15-second video, there are enhancing elements and face filters much like Snapchat gives its users all-in-one experience.

And one can upload their own creation to their profile or string one or more short-clips together. The best part comes with the ease of interaction where the users can communicate effectively through compelling videos.

Some other key moves that had heads bobbing to their videos are,

TikTok uses AI and machine learning techniques to understand and deliver exactly what the users want. The app will make a note on the user activities and display videos that they may be interested in based on their likes and community.

Unlike other social networks like Instagram, the “for you” collection is shown first rather than “following” which makes the users explore what’s is trending and featured before they can check into “following” feed. Also, the app runs and lists their top campaigns and challenges that encourage many users to participate along with their favorite “musers”. Now, brands and top performing artists are running their own campaigns and challenges to promote their latest release.

The app has a well-established global presence but the team takes different locales into special consideration and crafting videos addressing their needs and interests. Like in Japan, the TikTok app partnered with major artists to bring out the teens who are confident and get over their shyness by forming interactive campaigns. Similarly, you can find the team is working on different parts of the world and coming up with new ideas to encourage participation from all over the world.

It is easy to assume that the video production app will be having a serious lawsuit concerning the music used for its videos. But the TikTok or the Musical.ly app handled it a neat way but partnering up with major production units in the states. Also, music companies are using the platform to their advantage for promoting their videos. Recently, Jimmy Fallon became the fan of the app and through his own campaign had the biggest engagement of more than 10.4m in the history of TikTok.  It is a win-win situation for the TikTok and the industry.